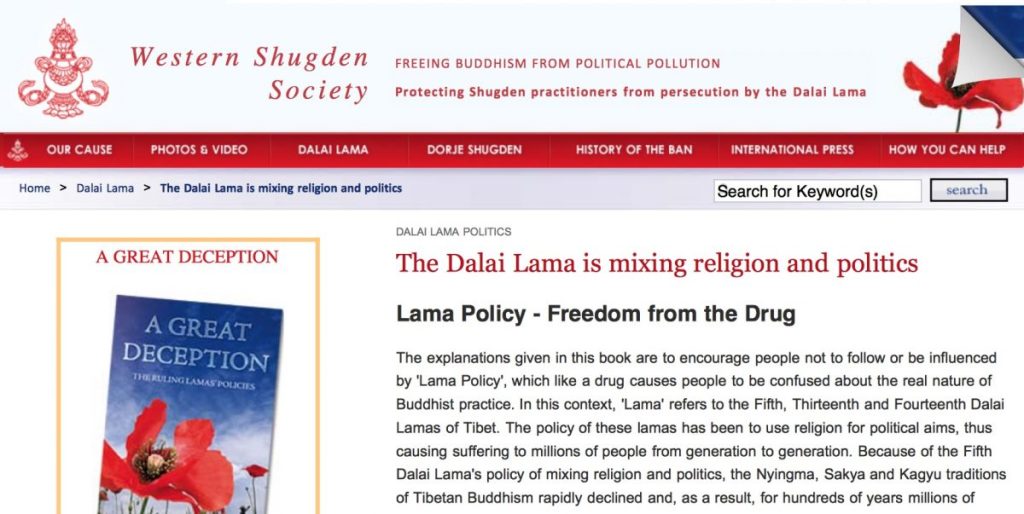 The Western Shugden Society (WSS) has recently carried a poorly researched essay titled “The Lama Policy: Freedom from the Drug” without cited sources, only a vague claim that the “paper” is based on a “collection of Tibetan books”. The essay seeks to undermine the institution of the Dalai Lamas and the Ganden Phodrang, rather than address specific concerns about the Shugden issue. The WSS has crossed yet another line in its deluded propaganda war – it has made evident that no longer is it campaigning just about the Shugden issue, its aim has expanded to include discrediting the TGIE, HH Dalai Lama, and anyone who dares support him.

The essay mentions the 5th Dalai Lama as the inventor of the system in Tibet that united spiritual and secular rule, but this is patently incorrect. In fact, the first religious rulers to also hold political power in Tibet were Sakyas. It was also Sakya Lamas who first established a priest-patron relationship with the Mongols as outlined here by the Sapan Foundation (A Sakya Charity in India):

“During Sakya Pandita’s and Chogyal Phagpa’s time, the Sakya Tradition reached its zenith in terms of religious and temporal importance. In 1252, Chogyal Phagpa was invited to the court of Emperor Kublai Khan who was converted to Buddhism. They developed a patron-priest relationship. The Emperor received teachings from Chogyal Phagpa for many years and he was given the title of several generations.”

The Sakyas continued to hold political power throughout both the 13th and 14th centuries, according to the website of HH Sakya Trizin, current holder of the lineage.

The essay then goes on to categorically claim that the Great 5th Dalai Lama was behind the murder of Dragpa Gyaltsen (with legend claims arose later as the wrathful spirit Shugden). However, this “fact” is also hotly disputed, and there are several conflicting historical accounts. In his essay “The Shuk-Den Affair” Prof. Georges Dreyfus. In these accounts explanations of Dragpa Gyaltsen’s death range from suicide, to illness, to stress, to a suicide specifically tied to a vow to arise as a Gelug protector with a mission to protect Tsongkhapa’s doctrine from being corrupted by Nyingma influences. A recent Tibetan work (Dol rgyal zhib ‘jug tshogs chung) argues that Dragpa Gyaltsen’s main opponents were actually related to a family dispute, between his family, the Ge-Kha-Sas and Sonam Choephel. Clearly, the WSS account is one sided, biased and lacks a measured weighing of the evidence.

In addition, the essay “Lama Policy: Freedom from the Drug” seeks to portray the 5th Dalai Lama as being vengeful against his opponent the King of Tsang, and murderously seeking the help of the Mongols. The article “Schisms, Murders and Hungry Ghosts in Shangri-la” argues that in fact the Great 5th showed tremendous restraint and sought a conciliatory approach, through ecclesiastical integration of the Nyingma teachings:

“At the time the Great Fifth gained power there were both secular and sectarian rivalries. In addition to various schools of Tibetan Buddhism, the old Bon religion was reviving its bid for supremacy in Tibet. Rather than use his power to crush the Nyingma sect, which he easily could have done through his alliance with the Mongols, the Great Fifth deliberately incorporated Nyingmapa teachings and practices into his ecclesiastical court (Norbu, 248-49). Some Gelugpa purists objected.”

So, ironically, it was the Gelugpa purists, who the WSS seeks to portray as non-political, who objected the the non-sectarian policies of the Great Fifth Dalai Lama, aimed at creating a more harmonious and unified Tibetan society.

The essay then goes on to repeat the same tired claim that HH the 14th Dalai Lama’s policies are aimed at destroying the integrity of the various orders of Tibetan Buddhism and making himself the head of a hodgepodge unified Tibetan church. In fact, a clear examination of the current Dalai Lama’s actions reveals a policy aimed at giving the Kagyus, Nyingmas and Sakyas a voice in the Phodrang government, that for years had been dominated almost entirely by Gelugpas. The essay neglects to mention the creation of a seat for the leader of each of the major lineages in the ministry in charge of religious affairs, and a policy aimed at recruiting government ministers in the TGIE from a variety of sects to reflect the religious diversity of Tibetan people.

WSS’s paper also neglects to mention that it is through the current Dalai Lama’s reforms that the TGIE has elected representatives, an elected Prime Minister and an essentially democratic system that even uses modern devices like the internet to register Tibetans overseas who want to vote in TGIE elections. While no one would argue the exile government doesn’t have its problems, the pace of change towards democratization is remarkable, especially considering the current plight of Tibetan refugees.

By most accounts the Dalai Lama was by the standards of his age a reasonably tolerant and benevolent ruler.[1]