In Germany there is a politician, Peer Steinbrück, who runs a campaign “More We, less I”. Spiegel Online investigated in a ‘Münchhausen Check’ if Steinbrück really says what he preaches by investigating two of his speeches and making a use-of-words statistic. For this they used among others a tool called Wordle to create a word cloud that makes the results easily visible. For the creation of a word statistic cloud the website or blog must have an Atom or RSS feed. The more a word is used the bigger it is written. In that way you get easily what is been stressed the most.

Now, I wondered what would be the result if I check the official New Kadampa Tradition (NKT) start page as well as their official site about Buddhism. I expected that at the centre of NKT and Buddhism is not the Buddha or Buddhism but NKT and its founder Kelsang Gyatso – this is what I would expect at least from a ‘good personality cult’ or based on my experiences.

Here are the results

Result of the official Homepage of the New Kadampa Tradition, http://kadampa.org/en/buddhism, relying on the Atom or RSS feed of that site:

The result of the official “Buddhism” page of the New Kadampa Tradition, http://kadampa.org/en/buddhism, relying on the words displayed, is:

To create the use-of-words statistic of NKT’s official “Buddhism” page I used all the words displayed on that page. The reason for this approach is that the Wordle javascript program relies on the Atom or RSS Feeds of the blog or site, and is therefore on all pages of a site the same. Hence, it doesn’t convey what words are really displayed to the reader of a specific page.

While the first result above shows that at the very centre of NKT is one person only “Venerable Geshe Kelsang founding NKT-IKBU”, the second result above demonstrates that “Kadampa” is what “Buddhism” is all about for NKT, and since the term “Kadampa” is synonymous with NKT – at least in the cosmos of NKT, as well as in their self-promotional approach – the meaning it conveys is ‘Kadampa=NKT=Buddhism’ or in brief ‘We are Buddhism.’

Another question I had is, who is the focal object of NKT’s Western Shugden Society? Is it Buddhism, Shugden or the Dalai Lama?

Here is the result of http://www.westernshugdensociety.org/

Using those statistic tools based on the NKT’s own Atom or RSS feeds and words displayed respectively it becomes somewhat more clear that the main object of ‘the Buddhism’ the New Kadampa Tradition is advertising is not so much Buddhism or the Buddha but mainly one person, NKT’s founder Geshe Kelsang Gyatso. The main object of NKT’s Western Shugden Society is not Dorje Shugden but one person, the Dalai Lama.

In that way it is also somewhat statistically explainable what drove Gen Kelsang Sangye to promote a new book of his guru at a BBC World News talk about Mindfulness in Schools. He has no other choice if he speaks about Buddhism or mindfulness than being compelled to stress his guru Kelsang Gyatso and one of his new books respectively because only HE is the center of his life, his tradition and his Buddhism.

But shouldn’t we begin with ourselves first? I checked this blog. Who is the focal object of this blog, NKT, Shugden, Tibet, the Dalai Lama, Sogyal, I (tenpel)? The RSS Feed gives this result:

Applying the approach of getting the statistics not based on the RSS Feed but on the mere words the start page displays, the following result is given:

To make the investigation complete, here also the words-displayed statistics – which means not relying on the RSS or Atom Feeds – of the NKT’s and the Western Shugden Society’s official start pages:

In case you have problems with the Javascript on Wordle, here are the results in a gallery: 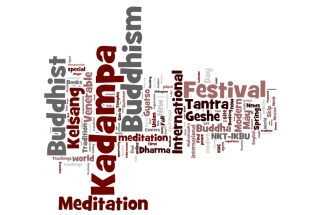 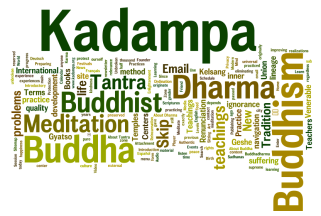 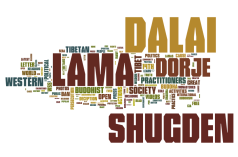 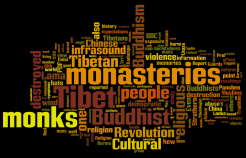