This is a short general summary of what Kelsang Gyatso taught and how. In 1977, he was invited by Lama Yeshe to teach at ‘Manjushri Institute’, created and owned by the FPMT (Foundation for the Preservation of the Mahayana Tradition) in Cumbria, UK. Kelsang Gyatso was not asked to teach on the ‘Geshe Studies’ programme but to give ‘introductory’ teachings – specifically to teach Shantideva and Chandrakirti.[1] Kelsang Gyatso later, and contentiously, kept Manjushri Institute as the mother centre for his New Kadampa Tradition (NKT). [2]

It is customary for every Tibetan teacher to give the origin of the teachings he or she gives, usually stating exactly who gave them each transmission and teaching. This is considered a sign of respect towards the lineage and a guarantee of the validity of the teaching.

Kelsang Gyatso acknowledges having ‘received [lamrim] teachings’ and ‘the opportunity to study and practice Heruka and Vajrayogini’ from his spiritual guide, Kyabje Trijang Dorjechang.

I can find no further acknowledgements in his other books as yet, except to the Tibetan texts he selected from.

I will refer to standard Tibetan Buddhist names for the texts that Kelsang Gyatso taught, as well as the titles of the NKT books (in brackets) published by Tharpa Publications, Kelsang Gyato’s own publishing company. All the information below is compiled from various editions of these books.

It is integrated in the Internal Rules of the NKT that the books and study programmes should remain unaltered after the author’s death. [3] No NKT teacher or student can publish using knowledge from these books or refer to their NKT ‘career’. [4]

Translated by Tenzin P. Phunrabpa; edited with and published by western students in later years. Compared to classic presentations, very few quotes from other teachers are included in the books.

Instructions on how to practice Vajrayogini (Taught 1981, pub. 1991) (Guide to Dakini Land)

Written with and edited by western students. Not known if these books were taken from previous oral teachings. No credits given in the books to any translator.

Commentary to a shortened Heruka Body Mandala (Compared with two other versions) (pub. 1997) (Essence of Vajrayana)

Earlier books were re- edited with western students and reissued, including simpler versions of Lamrim and ‘Tantric Mahamudra’. Kelsang Gyatso taught using short extracts from his own books; students would understand the rest by reading. References within the books refer to Kelsang Gyatso’s books.

The NKT and its study programmes, including ‘Teacher Training’ were started in 1992 after Kelsang Gyatso designed them on his ‘retreat’ (1987-1990) when he also wrote ‘A Meditation Handbook’; a highly simplified Lamrim manual. After 1992 he no longer gave twice weekly teachings to the Manjushri Centre community. NKT students were expected to study with western teachers: Kelsang Gyatso only taught at ‘NKT Festivals’ a few mornings each year.

When the first NKT ‘World Peace Temple’ was built in Manjushri, c.1999, Shugden Five Deity statues were integrated into the main shrine room. Shugden statues are traditionally kept in a separate room. When he first came to Manjushri Institute, Kelsang Gyatso would hold Shugden pujas in his private rooms with invited guests. [6] 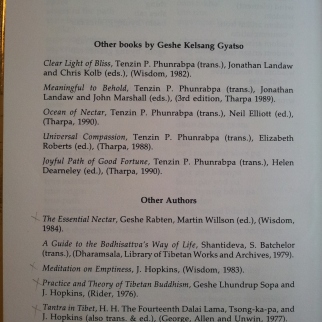 The bibliography – from Heart of Wisdom, pub. 1989 (2nd edition) shows that Ocean of Nectar was first translated by Tenzin P. Phunrabpa,

The third shows the complete deletion of the translator from Ocean of Nectar (pub. 1995)

9§1. To prevent the development of confusion and disagreement among NKT students, no NKT-IKBU Teacher or Spiritual Director shall write books or other material that contain elements of traditions that differ from the New Kadampa Tradition or that in any way contradict NKT Dharma books.
9§2. After the author passes away, no-one shall change the meaning or presentation of the content, in any format, of the Dharma books used in the three NKT Study Programmes,  unless there are valid reasons for doing so approved by the GSD and the majority of the members of the Education Council.