In 2012 a paper, New Kadampa Buddhists and Jungian psychological type, about the New Kadampa Tradition (NKT) was published in the journal Mental Health, Religion & Culture Volume 15, Issue 10 that hasn’t received much attention so far by former members of the NKT. The following post discusses it a little and gives some quotes.

The research examines the Jungian psychological type of 31 adherents to the New Kadampa Tradition. The authors state about this type or research:

Psychological type theory has its roots in the pioneering and creative work of Jung (1971) and has been further developed and extended by a series of self-report psychometric instruments, including the Myers-Briggs Type Indicator (Myers & McCaulley, 1985), the Keirsey Temperament Sorter (Keirsey & Bates, 1978), and the Francis Psychological Type Scales (Francis, 2005).

At its heart psychological type theory distinguishes between two orientations (introversion and extraversion), two perceiving functions (sensing and intuition), two judging functions (thinking and feeling) and two attitudes (judging and perceiving). Taken together these four binary choices lead to the generation of 16 complete types. A key assumption in psychological type theory is that these key preferences between introversion and extraversion, between sensing and intuition, between thinking and feeling, and between judging and perceiving are innate, although for many contextual, environmental, or work-related reasons individuals may operate outside their innate psychological preferences. Since the late 1960s psychological type theory has had an increasingly visible part to play in the psychology of religion (for an overview see Francis, 2009). Different strands of empirical research within this tradition have concentrated on exploring the psychological type profile of religious professionals …, and exploring the connection between psychological type and different ways of expressing religious faith …

The researchers approached a quarter of the participants at an annual festival of NKT USA in April 2005 at Glen Spey, New York. The rest were approached individually at weekly events at two centres in southern Ontario, Canada. According to the paper “of those approached, 70% agreed to participate, and were given a recruitment letter orienting them to the study and a survey package with a return-addressed envelope. Of the packages taken, 75% were returned.” 25 of the participants lived in Canada and six in the USA.

There is a discussion among Buddhists that perhaps the NKT have diverged far from the traditional focus of Buddhism into a highly personalized and “Western” interpretation of faith. A high Gelug tulku and a close disciple of Trijang Rinpoche – the latter is referred to in the NKT as Geshe Kelsang Gyatso’s ‘root guru’ – said recently to a friend of mine that he regards the NKT as an esoteric movement but not as Buddhists. Using this understanding, the conflation of NKT members with ‘Buddhists’ found in this research would be like researching Jehovah’s Witnesses as representative of all Christians. The reasons given for choosing the NKT as a focus are because rituals and discussion are conducted in English and ritual are set to Western music. I doubt that this a valid reason for choosing NKT – “one of the newest and most controversial Buddhist movements.” (The New Believers: A Survey of Sects, Cults and Alternative Religions, David Barett p.310). To quantify Buddhist behaviour by focusing on the members on what it identifies as a new and evolving faith group can be seen as a contradiction. However, there is a fairly aware discussion of the group itself and Dorje Shugden controversy in the article.

The authors made a particular positive experience with the NKT followers which they describe on page 1057 in the following way:

Approaching our research with a specific temple of focus, we were surprised by the kindness and openness of the members and their willingness to participate. We did not foresee such openness in wake of Dorje Shugden controversy and the media attention it has received. We were delighted to participate in services at the temple, as well as observe members in their homes and at the NKT centre engage in sharing the Dharma. Immediately we were fascinated by Western and Canadian-born lay members teaching Dharma on the raised cushion; we were also impressed by their dependence on Geshe Kelsang’s books confirming some of Kay’s (1997) findings. Many members of the temple consistently reminded us that they were an open group outside of the auspices of traditional religious and more specifically Christian religious authority structure.

The researchers don’t consider that the 31 NKT adherents who made themselves available to the research might be idealistic people prone to give evidence to the validity and effectiveness of NKT’s interpretation of Buddhism as a valid path to happiness and peace. In their summary of the NKT, the research team also didn’t take into consideration that there is a strong culture in NKT to repress and deny negative feelings (spiritual bypassing). As in almost all previous research about NKT, this research omits to consider former NKT adherents and their suffering; their reports are neither mentioned nor at least taken seriously into consideration.

Former NKT adherents understand from their own experience and behaviour while members that within NKT that there is a type of a “happiness cult” culture present where one feels impelled to show to the outside world or non-NKT followers the validity of the NKT, reinforced by pressure to be seen by other members, and a personal practice of being smiling and happy all of the time. For me as an Ex-NKT adherent, Ex-NKT monk, and Ex-NKT teacher it seems that the research team has fallen pray to this charm, which also beguiles journalists and new people who are attending NKT classes. “Blinded by charming smiles” these new observers and researchers don’t explore if the NKT has or might have quite of another face behind this beautiful façade. (see e.g. Western Shugden Society) Critical former NKT followers understand the “blissful smiles” as a means to attract people to the organisation. A less charming name anti-cult activists would use in this context is the term “love bombing“. By this, I don’t mean to imply that NKT practitioners are not sincere but I want to highlight how easily people even with critical and intelligent faculties are captivated by the charming smiles of NKT adherents.

It is interesting that the research seems to indicate that the NKT attracts a very idealistic sub-section of the population (NFs are sometimes described as Idealists and are about 13-22% of the general population, while they are more like 41% of the NKT sample. INFJs are sometimes described as the type most likely to be ‘martyrs’ or that kind of spiritual searching – they account for between 1-3% of the US population but about 19-20% of the NKT members). It is also significant that the NKT attracted very few SPs (3% compared to 20-30% of the general population). SPs are primarily interested in having a fun time!

Here you can have a look on chart three and a quote of the results: 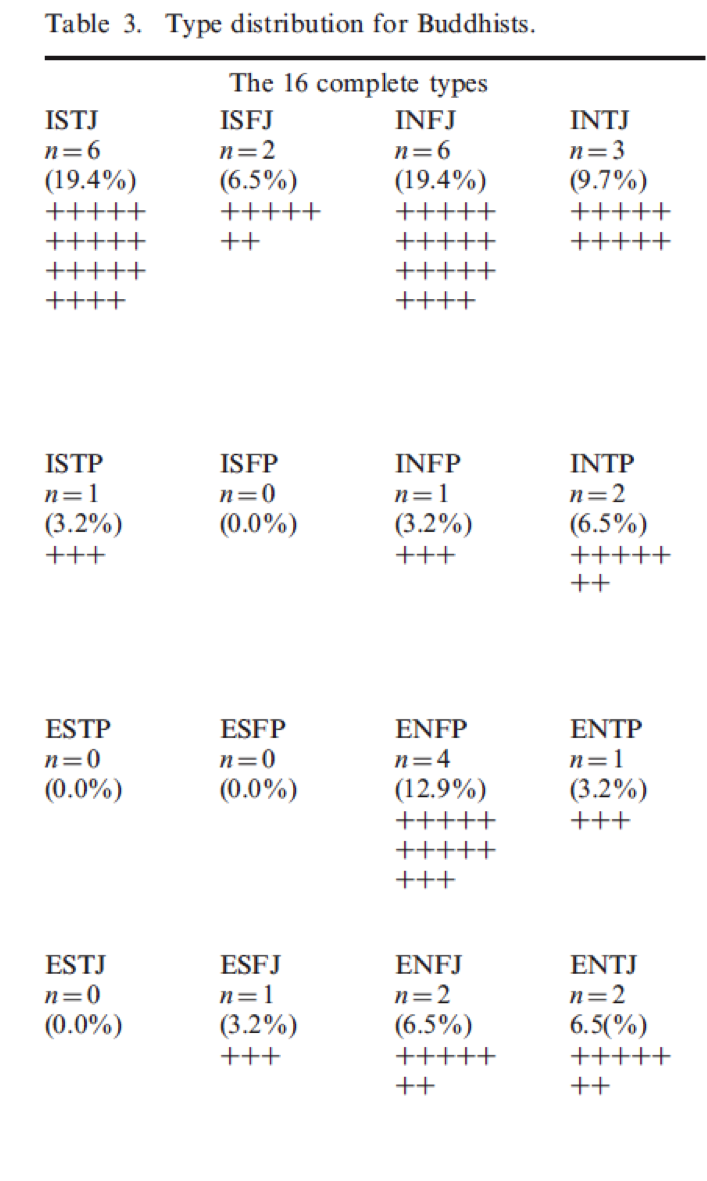 Table 3 presents the type distribution for the 31 New Kadampa Buddhists. These data show clear preferences for introversion (68%), for intuition (68%), and for judging (71%). There is a balance between preferences for feeling (52%) and for thinking (48%). In descending order, the dominant preferences are intuition (45%), sensing (26%), thinking (16%), and feeling (13%). Here are a group of people for whom the NF temperament (42%) far outweighs the SJ temperament (29%). The most frequently occurring complete types are INFJ (19%) and ISTJ (19%). Myers (1998, p.7) provides the following profile of individuals who prefer these two types.

“(INFJs) succeed by perseverance, originality and desire to do whatever is needed or wanted. Put their best efforts into their work. Quietly forceful, conscientious, concerned for others. Respected for their firm principles. Likely to be honoured and followed for their clear visions as to how best to serve the common good.”

“(ISTJs are) serious, quiet, earn success by concentration and thoroughness. Practical, orderly, matter-of-fact, logical, realistic and dependable. See to it that everything is well organised. Take responsibility. Make up their own minds about what should be accomplished and work towards it steadily, regardless of protests or distractions.”

The authors of the article did not compare these figures with the general population, only the other religious figures which is a bit odd. The general US figures can be found here: http://www.capt.org/mbti-assessment/estimated-frequencies.htm

The paper’s summery about the history and background of the NKT is the following (pp. 1056, 57)

Since the Chinese occupation of Tibet in 1949, Tibetan Buddhist teachers have moved to Western countries to escape religious persecution. This forced migration outside the Tibetan Diaspora has caused Tibetan Buddhism to establish itself in many Western countries such as Canada and the United States (Misra, 2003). Media attention of the Tibetan plight, coupled with the public dissemination of the charisma of the fourteenth Dalai Lama created global awareness not only of the Tibetan people but of Tibetan religion and culture (Lopez, 1999). As a result, more Westerners began exploring Tibetan Buddhism as a potential spiritual or religious home. Through rapidly gaining popularity, Buddhist religious leaders migrated or emerged in Europe and America forming offshoot Tibetan Buddhist groups. Some of these groups formed outside the authority of Tibetan Buddhist schools of thought (Seager, 1999). A particular new religious movement that derived from Tibetan Buddhism is New Kadampa Buddhism, a movement composed primarily of newly converted non-Tibetans typically from Western countries. We use the terms Western and Westerner here as a loosely inclusive term which excludes those of Asian origin and includes those who have been raised and educated within Europe, America, or Australia.

Initially founded in England, New Kadampa Tradition (NKT) is unique because its foundational doctrine is inherently Gelug-pa (the Tibetan Buddhist School typically identified with the Dalai Lama), but is not politically or religiously associated with either the Gelug-pa order or the Tibetan Government in Exile (Chryssides, 1999; Lopez, 1999). As a result, NKT has the freedom to create radically new ways to promote Buddhism as well as educate its own members. New Kadampa Buddhism was chosen for this research for its attempt to Westernise advanced Tibetan Buddhist rituals. Their rituals were set to Western music, chants and theological discussions were conducted in English, and the organisation is almost entirely non-Tibetan in membership particularly in the United States and Canada. While NKT makes for an excellent focus for research in Buddhism in North America, it is not without controversy.

The most controversial aspect of New Kadampa Buddhism is the Dorje Shugden practice which the Dalai Lama has outlawed in Tibetan Buddhist communities. This practice is central to NKT and is used to protect Buddhist Dharma from corruption and misinterpretation. Dorje Shugden is considered the Dharma protector of NKT as opposed to the more traditional wrathful deities of Mahakala and Dharmaraja, which are invoked by the Gelug-pa monastic order (The Yellow Hats); this difference becomes one of the central points of separation from the Gelug school of Tibetan Buddhism (Dreyfus, 1998; Lopez, 1999). From the Dalai Lama’s perspective, the practice of Dorje Shugden is worship of a malicious spirit coupled with a long history of sectarian tensions within the institution of Tibetan Buddhism. This coupled with a series of murders in Dharmsala India during the 1970s of monks, and the almost fundamentalist zeal followers of Shugden creates a controversial perception (Batchelor, 1998; Dreyfus, 1998). Even the term cult has been used to describe NKT (Clifton, 1997).

The product of this controversy is a new and evolving religious tradition. By separating from Gelug-pa monastic school, NKT has the freedom to train lay members as Dharma teachers, and does not limit Western practitioners from becoming monks or nuns (Chryssides, 1999). It also provides the freedom to modify styles of religious practices outside of the cultural and traditional norms of Tibetan Buddhism. By giving lay members educational power to teach the Dharma, NKT is able to spread the NKT interpretation of Dharma more quickly and to wider audiences. According to the Kadampa website in 2011, NKT had over 800 Kadampa Buddhist centres and temples. Interestingly with such a wide international presence, little to no research has been conducted on NKT or its adherents.