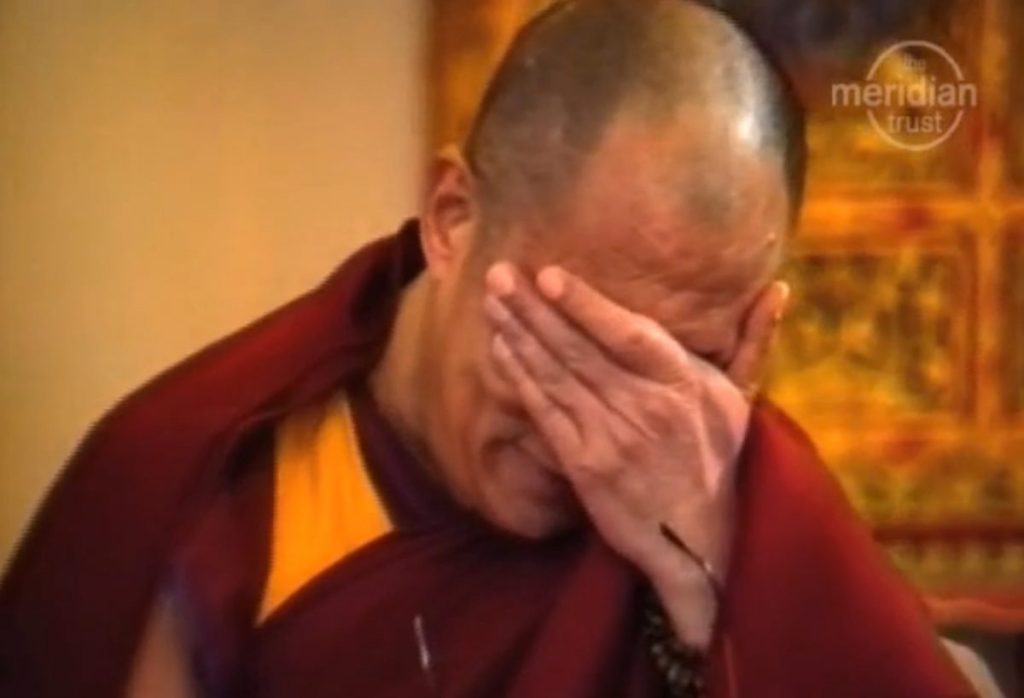 Many, many years ago, when I had the chance to escape my Buddhist “cults” – the New Kadampa Tradition (NKT) and Ganden Tashi Choeling (GTC) – I had the good luck to see a video about a conference where Western Buddhist teachers met with His Holiness the Dalai Lama and three other Tibetan lamas, Drikung Chetsang Rinpoche, Panchen Otrul Rinpoche and Amchok Rinpoche. They discussed problematic issues in bringing Buddhism to the West.

The teachers were from the various Tibetan, Zen and Theravadin traditions, among them Ven. Thubten Chodron, Jetsun Tenzin Palmo, Ven. Ajahn Amaro, Jack Kornfield, Junpo Sensei, and Prof. Dr. Robert Thurman.  I’ve always missed that this documentary is not available in the internet. By now, only a written summary of this historic meeting was available. However, the situation has changed now because The Meridan Trust made the documentary available:

I remember vividly how His Holiness was somewhat perplex after Ven. Tenzin Palmo told about the lack of structures for ordained – especially for nuns (!) – in the West, and how His Holiness started first to laugh and then to weep. I was amazed to see this response and subsequent compassion. (The NKT had convinced me after years of “brainwashing” that His Holiness has no compassion, is an ordinary and even bad politician – who aims to “destroy the pure Buddhadharma”, a spiritual beguiler par excellence – in short the worst person on this planet. But here, in this video, I could see the opposite. I’ve never seen Kelsang Gyatso, the founder of the NKT, who chose H.H. the Dalai Lama as his main enemy, being moved or even starting to cry when being faced with the suffering of others. This video and especially this episode was a mile stone in my re-evaluating who the Dalai Lama is and if or if he hasn’t spiritual qualities.)