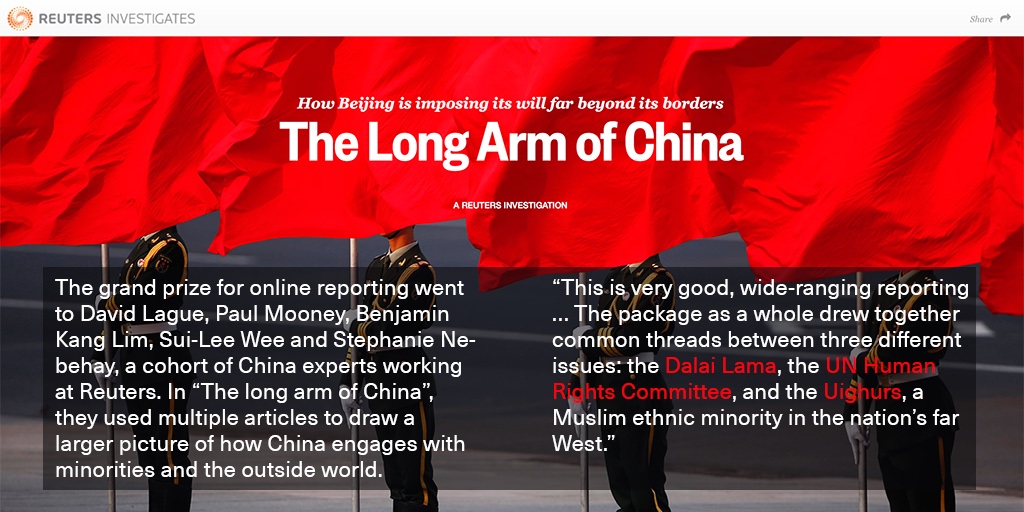 In “The long arm of China”, they used multiple articles to draw a larger picture of how China engages with minorities and the outside world.

“This is very good, wide-ranging reporting,” said barrister Jacqueline Leong, who has been a HRPA judge since its first year in 1996. “The package as a whole drew together common threads between three different issues: the Dalai Lama, the UN Human Rights Committee, and the Uighurs, a Muslim ethnic minority in the nation’s far West.”

The Human Rights Press Awards recognize top rights-related reporting from around Asia and are organized by The Foreign Correspondents’ Club Hong Kong, The Hong Kong Journalists Association and Amnesty International Hong Kong. The goal of the Awards is to increase respect for people’s basic rights and to focus attention on threats to those freedoms.

Part four of Reuters investigates “The Long Arm of China” covered the Shugden controversy and the role China plays in it, “Special Report: China co-opts a Buddhist sect in global effort to smear Dalai Lama”. This investigative article was written by David Lague, Paul Mooney and Benjamin Kang Lim. They sought among others the expertise of Robert Barnett, Elliot Sperling and Thierry Dodin. Basing their article on Reuters’ investigation, China Digital Times (CDT) wrote a neat summary and linked to different background sources: “China Backs Sect in Global Effort to Smear Dalai Lama”.

On Tuesday, May 24, 2016, the US government Congressional-Executive Commission on China, co-chaired by former presidential candidate Marco Rubio, held a hearing to “examine the Chinese government’s reach beyond its borders to stifle critical discussion of its human rights record and repressive policies …. These efforts include … clandestine efforts to discredit the Dalai Lama through a Communist Party-supported rival Buddhist sect …”. The hearing was held to formulate recommendations for Congressional and Administration action to combat such activities.

According to Phayul and Tibet.net, an American District court penalized a Tibetan Shugden follower, Mr. Lobsang Gyaltsen aka Dowa Gyakpa, yesterday (May 23) for assaulting a senior citizen during a mass protest rally two years ago during His Holiness the Dalai Lama’s visit to the Massachusetts Institute of Technology (MIT).
There is an English interview portion with the lawyer who represented Mr Ngawang Norbu Sherpa, the victim. What becomes clear – at minute 19:46 – is that the shugden protestor, Lobsang Gyaltsen, was the first to launch a legal complaint, against Mr. Sherpa for defending himself. Because Mr. Sherpa put his arm out when Lobsang Gyaltsen, the Shugden supporter, kicked him. Then, after he was cleared with evidence, Mr. Sherpa made the counter claim, which resulted in 1 year of probation for the defendant and month fines. The Shugden defendant, Mr. Lobsang Gyaltsen, admitted his wrongdoing and if he violates his probation faces two years in jail.