In 2016 the New Kadampa Tradition (NKT) was banned on Reddit’s popular  Buddhism subreddit, which has currently 122.935 subscribers. The reasons been given for the ban and also if a ban is reasonable after all is a subject for debate. (I criticised the arguments – especially those initially been given – to ban the NKT. See here).

However, of course, for the NKT – been driven by a powerful missionary attitude – this is not really satisfying. Hence, two days ago, NKT teachers founded an own subreddit, Modern Buddhism – with currently 110 members.

Luna Kadampa, most believe behind this pseudonym is Lucy James, sees already “thousands” of new potential followers joining the NKT. She wrote on Facebook: 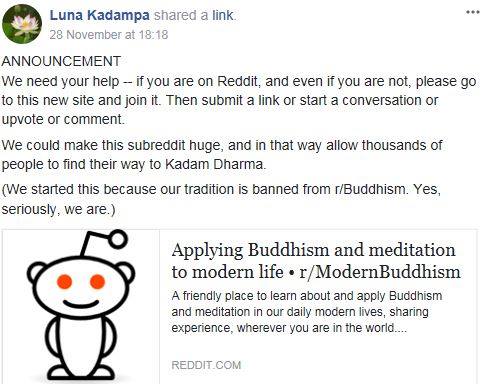 The description of the NKT group “Modern Buddhism” on Reddit reads:

A friendly place to learn about and apply Buddhism and meditation in our daily modern lives, sharing experience, wherever you are in the world.

I had a quick look into some threads and was amazed by 1) the nativity of what has been written so far, and 2) by the deceptiveness of the group, hiding carefully who is behind it. Quickly I wrote five comments to counter that. Guess what happened? The NKT moderators on the subreddit “Modern Buddhism” banned me from it and deleted all my comments.

I asked the moderators why they have banned me. Their answer was: “For breaking the rules https://www.reddit.com/r/ModernBuddhism/about/rules/”

My comments were posted under Tenpel and must be seen in context of what was discussed in these threads:

IMO, “politics” and “slander” are just categories the NKT applies to ban unwelcomed information about themselves. Information they don’t want people to read or get aware of. Banning me and deleting my comments is nothing else than censorship & politics – much in the tradition of dictatorships.