Dzongsar Jamyang Khyentse Rinpoche, who has been the leading advisor steering Rigpa during its recent crises, has spoken often of his reverence for Chogyam Trungpa. He has humbly said that he could never hope to reach Chogyam Trungpa’s level of understanding and capabilities as a Buddhist master. He has stated that Chogyam Trungpa was the only one who truly understood Westerners. For anyone who thinks that this viewpoint can be helpful in moving Rigpa forward with reform at this time, we advise them to read the story of a Halloween party held during Chogyam Trungpa’s 1975 Naropa Seminary. 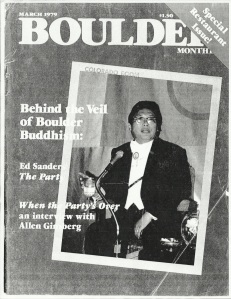 This is a story of ‘crazy wisdom’ gone to frightening extremes. Two seminary attendees, the poet W.S. Merwin and his girlfriend, Anne, had retired to their room for the night after attending the Halloween party for a short time. Chogyam Trungpa, who was quite drunk by then, ordered them to return to the party. When they refused, he sent his guards to coerce them. Eventually, the guards ended up breaking down doors and a fight ensued, with broken bottles gashing faces and friends fighting friends. The room was completely trashed. Chogyam Trungpa’s guards eventually won the battle and brought the couple downstairs, whereupon Trungpa demanded that Anne strip. When she refused, she was stripped by the guards, screaming.

Many of the people at the party were drunk. There had been much stripping before the couple were brought down. Some naked participants had been carried above the heads of the guards and paraded through the room.

This was all done to mark the occasion of the start of Vajrayana teachings.

There seems to be an assumption amongst some Tibetan Buddhist lamas that Westerners need this kind of treatment—maybe they think that we’re rough and arrogant and need to be humbled in violent ways. In a letter to Bernie Schreck, Dzongsar Khyentse Rinpoche states:

Western psychotherapy and other spiritual and psychological paths are all fine so long as their methods crush ego. If they do that, they are valid paths. Any path that does not crush ego is spiritual materialism even if it is coated with all kinds of Buddhist jargon.

Lets take a break to analyse this a bit and to stir some questions and doubts. Indo-Tibetan Buddhism has very fine definitions for all its terminology—as do sciences. The definitions help to acquire precise knowledge and understanding and to avoid confusion or misunderstandings.

What is the definition of “ego”? What is the definition of “crushing the ego” in Buddhism? There are none because this is not a Buddhist terminology. In Buddhism we speak about the wrong view of a self (or more technically “the view of the transitory collection”) which projects a reality onto the self that is just not there. As a result, the mind perceives a more concrete, independent, permanent, unitary self than is actually present. Believing in this falsely appearing self as a truth, the mind grasps to it as a truth and is carried away. Like seeing a water mirage, believing it’s truly water, being thirsty, one runs after it. But there is not this water which appeared so vividly. Similarly, there is no such independent self, though it appears so vividly as such. Selflessness or self are defined differently in the different Buddhist schools but basically it‘s about a false view. This wrong view has to be abandoned. How? By cultivating insight or wisdom (discriminating intelligence).

To propound “Crushing the ego” as a right Buddhist approach in a context of violence, humiliation and sexual abuse—as happened in Rigpa and Shambala—seems to be a dangerous idea. In the army or cults, people with too much backbone, who do not become subordinate, are usually referred to as having “too big an ego” and “crushing their ego” means to crush their power of will, to make them obedient, slavish sheep, who follow the leader’s commands—who surrender and become subordinate. But destroying willpower is not Buddhism—it’s cultic or military, or a control of people’s business.

In Western environments and in manipulative cults, the idea of “crushing the ego” is often a tool to dominate people, to crush their backbone and to make them obedient. Moreover, there are many Westerners who have a weak self identity or less self-confidence. Such people, who also might lack love in childhood, might be thirsty to be loved, to be recognised, to get attention from a kind person—or a charismatic, nice smiling lama. If such a lama abuses these emotional needs by manipulating the person with a mixture of giving love and violence (humiliation, beating, means of subjugation), what a damage for such a person! How ignorant!

At the 1993 conference of Western Buddhist Teachers, HH Dalai Lama made this comment about what he had observed in Chogyam Trungpa’s students (Thubten Jinpa translating):

Fear is another tool used in cults to control. Sometimes students are threatened with hell, sometimes they are threatened with being ostracized from the group if they don’t behave, losing their friends—and in the case of Scientology, even their close family members. The story of the Halloween party is certainly an incident that could evoke fear. Not only did Chogyam Trungpa use violent means to coerce students, but he persisted in these means to the point where the students themselves became violent and behaved in ways that could only undermine their own self-respect.

Recently, we placed an article on this blog site claiming that a video clip posted by Dzongsar Rinpoche on his Facebook page was misleading and would only add to students’ confusion over His Holiness’ position on criticizing a Vajrayana lama. We demonstrated that the statement made by His Holiness was differentiated later, after he was asked again about his statement. In fact, right after His Holiness made the statement posted by Dzongsar Khyentse Rinpoche (minute 47:50 to 49:40), the following differentiating advice is given by His Holiness (minute 49:40 to 51:32):

Alexander Berzin: “And if we advise other students to follow that course of action and remain neutral. Are we accumulating the negative karma of causing a separation between a student and their teacher?”

His Holiness the Dalai Lama:

That would depend on the individual cases. If you clearly see that danger, then advise. He should keep this distance. […] It depends on the individual cases. […] If this particular instance has [the] potential [of] damaging the student’s spiritual path such as causing the loss of faith in the Dharma and so forth, then of course, the best course is to advise that person to keep a respectful distance. Or in other cases it is possible that the incident has not really caused much damage to the student’s practice or spiritual path, then of course, one has to respond differently. Of course, in all of these cases, motivation is really the key.

As of this date, the (misleading) video clip is still on Dzongsar Khyentse Rinpoche’s Facebook page and there have been 263 shares of it. 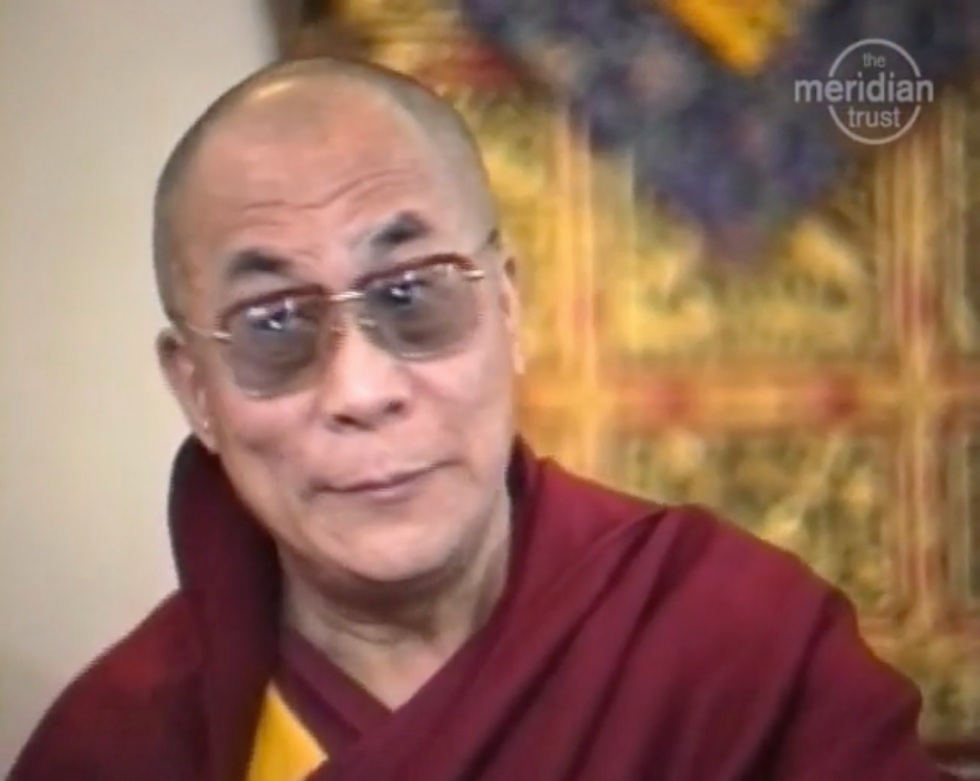 From a lama in a position of serious leadership, during a critical time, with many students’ spiritual paths at stake, with many students struggling with depression and trauma, not knowing how to move on or to protect others from similar harm, such a misrepresentation of the Dalai Lama’s stance is troubling. It would be fine for Dzongsar Khyentse Rinpoche to simply disagree with His Holiness. Then students are given a clear choice and a clear view. It would also be fine for Dzongsar Khyentse Rinpoche to interpret why His Holiness spoke differently on two occasions. That would honor His Holiness and honor students’ ability to discern. It is not fine for him to continue clouding the truth and misrepresenting His Holiness by just waiting for things to blow over. This is the status quo of so many of the troubles in Western Dharma Centers as lamas refuse again and again to simply address reality. This is how Rigpa weathered every storm of their past.

We do hope we’re wrong and Dzongsar Khyentse Rinpoche will address the problem of the misleading Facebook post sometime in the future.

There is another big concern we have. The advice Dzongsar Khyentse Rinpoche has given so far is going into a direction of circular thinking, which is a mark of cults. While he stated at Rigpa London finally clearly:

Please, never think I am not saying there is, this ambitious, not well trained, vicious, selfish Gurus, either they are self-proclaimed or also recognised properly, doesn’t matter… abuse, take advantage of people, sexually, physically, financially, emotionally, yes it exists, you should not be naïve that all this Tibetan Lamas, you know, endangered species, that they are all like holy beings, no… we cannot defend them, we have to expose them for the sake of the Buddha Dharma and for the sake of the Vajrayana. But I am also talking about Vajrayana principle, in the Vajrayana principle there is the principle of something called pure perception which we will be talking tomorrow, thank you. —Dzongsar Jamyang Khyentse, London, on 10 March 2018

We are worried because we think this advice by Dzongsar Khyentse Rinpoche—summed in 1) to 3)—is a type of circular thinking that protects and enables the abuse in an inner circle. This way of thinking seems to also be the basis of abuse as it happened in Rigpa. And this is why the difference in opinion, as expressed by HH the Dalai Lama or Yongey Mingyur Rinpoche (“the safety of the victim comes first”, “So, the only thing is to make it public, through newspapers, through the radio. Make it public!”), matters so much.

“The realm of cults is fuzziness” says cult expert Steven Hassan. While HH the Dalai Lama and Yongey Mingyur Rinpoche have contributed with compassionate and clear advice, some of Dzongsar Khyentse Rinpoche’s statements seem to add more fuzziness and more ambiguity to a already confusing situation. This makes it hard for many people struggling with these topics to find some wholesome orientation.

In his support of the letter by the eight ex-senior Rigpa students, His Holiness spoke of feudalism. He also spoke of the need for a revolution. He has also been very clear that practices of so-called ‘crazy wisdom’ are only to be practiced by mahasiddhas of very high realizations—and that apart from maybe one or two such practitioners in the caves of the Himalayas, he did not believe that any such mahasiddhas existed today.

He also further elaborated that such a mahasiddha could only indulge in alcohol or sex if he was at the spiritual realization where a cup of urine was no different than a cup of alcohol—or also, if the mahasiddha performed miracles that could be empirically investigated by scientists. Any attendant of Chogyam Trungpa would tell you that the drink that this ‘crazy wisdom’ alcoholic lama reached for each morning was never a cup of urine! Without the full realizations, then the behaviors are too much about power.

Rigpa students have been subjected to many years of violence being justified in the name of ‘crazy wisdom.’ Right now, they need to know that their Dharma Centers are safe places. How can Rigpa assure them of this when there is admiration for such violent behaviors being voiced by the lama they have chosen to advise them moving forward?

The current developments within Rigpa and Dzongsar Khyentse Rinpoche’s role as their chief advisor indicate for us, that Rigpa might be far from resolving their issues.