I guess you read or heard it already, the International Shugden Community (ISC) announced their “dissolving”. What is a bit mysterious is the why and if this is meant seriously. I want to share briefly some thoughts with you about this.

This announcement was made on the 26th February, 24 hours after Tibetans and Ex-NKT activists staged counter-protests against Neil Elliott’s teaching venue at Putney library.

Neil Elliott can be considered as the main ideologist behind the spread and expansion of the New Kadampa Tradition (NKT) as well as the creator and maintainer of the driving forces in how the NKT recruit new members and in how the NKT bind them skilfully to their organisation.

Its the NKT who ran those protests via ISC.

Those counter-protests against NKT centres in London and in Great Britain, I think, were very effective to raise awareness about the controversial background of the NKT and in that sense they are a real threat for the missionary drive that pervades the NKT since its inception. That’s why some ex-NKT (and so do I) rather speculate that the withdrawal from the Anti-Dalai Lama protests might likely be based on this perceived threat for their further expansion. However, Reuters or The Guardian specualte it was because of the investigative article by Reuters, “Special Report: China co-opts a Buddhist sect in global effort to smear Dalai Lama, from Dec 21, 2015.

Maybe it was a combination of both. In general, phenomena arise due to many causes and conditions. The cessation of the protests was even predicted by the Dalai Lama a while ago. It might be worth to note that the NKT / ISC dated their dissolution three months earlier, on December 1st 2015.

There is also a new piece written by Tsering Woeser on RFA, The Shugden Issue Used to be Just a Religious One. I cannot really agree with many points in it, however, I can fully subscribe to this point of view:

In indicating that followers of the Gelugpa school should drop their Shugden practice, the Dalai Lama is effectively handing over greater religious freedom to believers. It is effectively a negation of something negative that yields a positive. – Tsering Woeser

Some days ago I asked Linda Ciardiello, who takes part in the counter-protests, to send me images and to give a brief report about them, putting them into perspective with what The Guardian wrote. Here is her report / her thoughts and some images and a video of the NKT counter-protests.

A “victory for real journalism” or a victory for determined activism?

When the Dalai Lama visited England in the summer of 2015 it should have been a joyful occasion – a celebration for the UK Tibetan community in exile. But sadly his visit was marred by a series of overwhelmingly loud, intrusive and offensive protests by the New Kadampa Tradition, under the banner of their front group, the International Shugden Community. Greatly disturbed and hurt by the actions of the NKT, an independent group of London-based Tibetans decided the time had come to stand up to the NKT, to fight back, and to send them a clear message that their actions would no longer be tolerated by Tibetans. Thus a counter demonstration was staged by Tibetans and Tibet-supporters on September 18th outside KMC London, NKT’s main south London centre in Morden.

Through social media, a number of former members of NKT heard that this counter-protest had taken place and came forward to offer the Tibetans their help and expertise for further direct action against NKT. Thus the counter-protest movement against NKT quickly began to gather momentum, with a second demonstration being held outside NKT’s Shantideva Centre in Reading on November 8th. At this demonstration a speech was delivered addressed to the Resident Teacher there and to the Spiritual Directors of NKT stating “We Tibetans have been victimised, intimidated, harassed and disturbed by your actions towards our Dalai Lama to a degree beyond our tolerance and we are therefore asking you to please stop hurting us” and that their campaign against the Dalai Lama “has a political dimension which is aligning the NKT to serve the agenda of China’s brutally repressive dictatorship”. It has recently been rumoured that a week after this demonstration in Reading occurred, with its direct appeal to the NKT to desist from their campaign, a private email from ISC bosses was sent out to NKT anti-Dalai Lama activists to say that their protests would stop as of December 1st.

But no such email was received by anyone outside NKT/ISC and thus the counter-protest movement against the NKT continued to gather strength and confidence with a third demonstration staged outside NKT’s Brighton Centre on December 13th, followed by a fourth outside their Bristol centre on January 31st 2016 which garnered extensive press coverage in the Bristol Post and a fifth outside their Southampton centre on February 21st, which also gained press coverage in the Southampton Echo. Meanwhile, the counter-protest movement had spread internationally, with a demonstration staged outside a Public Talk in Vancouver, Canada given by Kelsang Khyenrab, NKT’s Deputy Spiritual Director on 10th February. During the question and answer session of his talk, Khyenrab was even confronted by a pro-Tibet activist in the audience who asked him what he had against the Dalai Lama and if he’d ever compared him to Hitler, at which Khyenrab attempted to wriggle out of his embarrassment by feigning amnesia.

With a forthcoming UK visit by the Dalai Lama planned for April, the counter-protest movement had no plans to let up with their pressure on NKT, as they set out to target the London NKT centres in the weeks prior to the visit, with Neil Elliott as a particular target. Elliott is the most senior teacher in the NKT and is understood to be the real “power behind the throne” of Kelsang Gyatso and the NKT. He is suspected to be the prime “mover and shaker” of their attacks on the Dalai Lama and the secret chief of their International Shugden Community. Thus on Thursday 25th of February a counter-protest was held outside Putney library, his teaching venue for one of their “branch classes”. The protesters caught sight of Neil Elliott and his assistant approaching the venue and some could not contain their anger with him, loudly denouncing him and his “cult” with “shame on you!” and “leave Tibetans alone!”

Within 24 hours of Elliott’s public humiliation a public announcement was issued by the International Shugden Community stating that they had already announced protests against the Dalai Lama would stop as of December 1st, and in addition it had now been decided that the ISC would disband completely and all their websites would be removed by March 10th. This announcement has been greeted with some relief but also considerable suspicion by Tibetans and former NKT members, not least because similar announcements have been made in the past, only for them to change their mind, break their word and regroup under a different name. The ISC is in fact the third front group NKT has created to mount their attacks on the Dalai Lama.

The announcement was met by NKT members and Shugden worshippers with surprise, disbelief and considerable confusion – no explanation was given for the decision. Some NKT members declared that perhaps the decision had been made because they “had won” – despite the fact that the Dalai Lama has not changed his stance on Shugden worship at all and has not accepted any of their demands. Yet perhaps they have won in the sense of the damage they have wrought on the Dalai Lama’s reputation in some people’s eyes – but that damage is as nothing compared to the damage they have done to their own reputation! 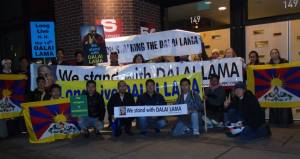 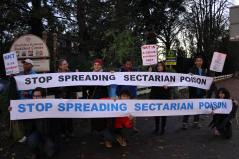 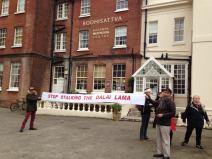 There was also the declaration that if need be, the NKT will re-group in the future. It’s not surprising therefore that Tibetans and former NKT do not trust the ISC’s announcement and nothing short of a public announcement and apology by the NKT themselves, not their front group, would ease that distrust. Thus the counter-protest movement against NKT continues and there have been two further demonstrations since the announcement was made – one outside Elliott’s class in Morden on Tuesday 1st March and one outside a day course NKT held at University College London in Bloomsbury on Saturday 5th March – with more to come.

Meanwhile, the Guardian newspaper has reported the collapse of the ISC in an article published on 28th February, as a footnote to the concerted attack made on the Guardian by the NKT/ISC for their unfavourable report on NKT’s activities and motives back in the summer, where they were labelled as an “extremist sect”:

”It’s worth recording that the same journalist’s reporting was vindicated last week when an international Buddhist sect which he claimed last summer was funded by the Chinese to denounce the Dalai Lama, announced it was dissolving. The sect had mounted a concerted email campaign against the paper, and held a protest near our London office demanding that the story be withdrawn. Then Reuters established beyond doubt the link between the International Shugden Community and the Chinese communist party. Collapse of protest – and a victory for real journalism”

The URLs remain active for these sites. In some cases, a short statement concerning the dissolution of the ISC and its media has replaced the content.

The NKT has been banned on Reddit – most of you might know – with rather dubious reasons. And when Stephen Pritchards of The Guardian writes “Then Reuters established beyond doubt the link between the International Shugden Community and the Chinese communist party. Collapse of protest – and a victory for real journalism.”, he is not really correct. Why?

Reuters established what other sources had already established, that China backs Shugden groups in India and Tibet; but Reuters did not establish that China backs financially the Western ISC which was founded and ran by the New Kadampa Tradition (NKT). However, some of the few Tibetans among the protesters have a clear link to China and to officials of the Chinese Communist Party. The merit of the Reuters investigative article is that it gave a rather holistic picture of the whole and ended the prevailing confusion of many international media about this tricky subject.

IMO, the whole international media coverage of the Shugden controversy is rather a testimony of the low quality and lack of expertise in religious matters of the media. It rather testfies that journalists and newspapers / media work and investigate under time pressure, and while lacking expertise, they have to hastily fill pages or broadcasts with interesting (attention catching) news – at the cost of sober and precise information. Their output in this context has very often left readers in confusion, ill informed and even misinformed up to that they offered their readers without further verifications (missing to contact academic experts), the propaganda of a media savvy campaigning group that has never shown any restraint from lying, distorting and manipulating information. The few well investigated articles can’t neutralise really the huge amount of ill informed press articles and documentaries that have been published over the last decades.

I hope this delusion has now an end and people can focus on relevant issues.