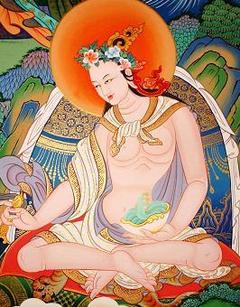 When I was a student of Sogyal Rinpoche, I knew all about Yeshe Tsogyal. I didn’t wonder about the story, what it meant to be a consort, what the practice entailed. I just accepted that Guru Rinpoche had a consort and that she was highly realized. It looked pretty cool. It was all part of the mystique, part of the landscape of life in Rigpa as I knew it, where the master could introduce you to the nature of your mind at any second. I didn’t feel the need to look deeper.

In fact, the practice of sexual union—or karmamudra as it’s properly called—is part of highest Tantra, an esoteric, secret practice. It isn’t supposed to be taught widely, not meant to be discussed. But then stories about famous consorts such as Yeshe Tsogyal are not secret. And certainly the idea of “tantric sex” has wide coverage in modern culture. So then, without the full tantric explanation, without understanding the full picture, students are left vulnerable to rumors, anecdotal information and half-truths. This is concerning.

For example, years after I left Rigpa, I took on another Dzogchen master for a short time and he had an interesting story. He said the practice of taking a consort was so special that in the past Tibetan men used to pray they would be reborn as women!

This meant nothing to me. I thought Tibetans generally prayed to be reborn as men! Stories like that, without the complete picture, simply increase the mystique and lure of consort practice. For example, how can a young, beginning student judge whether or not Sogyal Rinpoche’s actions have any connection to Buddhist practice if she hasn’t been given anything but rumors and stories, lacking any grounding in the practice, its purpose and guidelines?

What is clear from everything I have read on these practices, from everything that is already made public, whether one is talking about Dzogchen or Mahamudra or Highest Yoga Tantra, the practice of sexual union—or karmamudra or using a seal partner or jnanamudra—is part of the highest Vajrayana. It involves a high level of realization before practitioners engage in it. It requires that the two partners are able to restrain orgasmic release (e.g. ejaculation).

HH Dalai Lama has spoken out and published books on tantra, saying that the risk of misunderstandings if he doesn’t speak is greater than the risk of speaking. I think that risk is relevant here, with women being harmed from a lack of understanding. Here is a quote from a talk His Holiness gave in 1997. Notice from the very first sentence how the level of practice that he describes is very high. Someone new to Dharma would find reading this difficult if not impossible.

Relying on a Sealing Partner

In order to make primordial simultaneously arising clear light mind fully and completely manifest, we must totally stop or cease all coarser levels of energy-wind and mind. In order to stop the coarser levels of energy-wind and mind from predominating, we need to generate a greatly blissful deep awareness. To generate a blissful awareness that is sufficiently intense and powerful to accomplish these aims, it is necessary for most persons to rely on a mudra, a sealing physical partner. The reason why the central Buddha-forms in the mandalas and symbolic universes of the anuttarayoga tantra class are mostly in the aspect of a father and mother couple is to indicate this necessity.

There is a great difference between relying on a sealing partner with full awareness that doing so is solely to provide the circumstance and source for developing a greatly blissful awareness to be used for the above purposes, and relying on one as a pathway of practice in the manner of a trespasser. Therefore, only especially well-qualified practitioners well-advanced on anuttarayoga tantra’s complete stage, who have trained in the practices of the subtle energy-channels and winds and who have gained mastery over them, are permitted to practice with an actual, physical karmamudra, a sealing partner for their behavior. Because they have gained full mastery over their energy-winds and channels, such practitioners never have the danger of experiencing the ordinary bliss of orgasmic emission that would either prevent or destroy their generation of a greatly blissful deep awareness. They are merely using their external and Vajra-bodies as a mechanical device to intensive the blissful awareness of voidness they have already achieved.

Before we have reached this advanced level of accomplishment, we are permitted to practice only with a visualized jnanamudra, a sealing partner for deep awareness. In An Ornament for “The Stainless Light” [Commentary on “The Abbreviated Kalachakra Tantra”] Kaydrub Norzang-gyatso has explained that, for practitioners of especially sharp faculties, relying on a visualized jnanamudra partner can also serve as a method for generating a greatly blissful awareness strong enough to dissolve at the center of the heart chakra all the energy-winds that are the most difficult to dissolve so that the clear light mind becomes totally and completely manifest. Thus it is not absolutely mandatory to rely on a physical karmamudra partner.

But regardless of our level of realization and whether we are practicing with a visualized jnanamudra partner or a physical karmamudra one, it is extremely essential to keep the purpose in mind and never practice without the three types of discernment or recognition. In order to block the mind’s ordinary appearance-making and apprehension of true and inherent existence, we visualize ourselves and our partner in the aspect of Buddha-forms made to appear by a mind blissfully aware of voidness. We discern our speech as the expression of clear light mind of inseparable bliss and voidness, symbolized by the seed syllables from which the appearance of our sexual organs arises in a purified form and with which they are “crowned” or marked. Furthermore, we understand our mind as always being a primordial clear light mind that arises simultaneously with each moment as a blissful awareness that is inseparable from also being a discriminating awareness of voidness. These are extremely important points that render reliance on a visualized or physical sealing partner into a skillful method on the path. Such reliance generates a deeply blissful awareness that acts as a circumstance for blocking the coarser levels of energy-wind and mind and making manifest clear light mind so that this clear light mind can be generated as a greatly blissful deep awareness of voidness. Only such awareness can eliminate the obstacles preventing liberation all at once and only such awareness can remove the obstacles preventing omniscience. To rely on a sealing partner as a method of practice without these three types of discernment is a transgression of the tantric vows.

And this is from Jeffrey Hopkins’ introduction to a commentary by HH Dalai Lama on the Kalachakra Tantra.

The various systems of Highest Yoga Tantra seek to manifest the mind of clear light, also called the fundamental innate mind of clear light, by way of different techniques. One of these techniques is to use blissful orgasm (but without emission) to withdraw the grosser levels of consciousness, thereby manifesting the most subtle level of mind. This very powerful and subtle mind is then used to realize the emptiness of inherent existence, thereby enhancing the power of the path consciousness realizing emptiness so that it is more effective in overcoming the obstructions to liberation and the obstructions to omniscience. This is how desire for sexual union is used in the path in Highest Yoga Tantra; in this tantra set, the usage of desire in the path is explicitly for the sake of enhancing the wisdom consciousness realizing emptiness by way of actually generating subtler and thus more powerful consciousnesses that realize it. The difficulty of using an orgasmic blissful consciousness to realize anything indicates that it would take a person of great psychological development and capacity to be able to utilize such a subtle state in the path. It also indicates how, without the contextualization of how and why sexual union is used on the path, the practice could be mis-used or misinterpreted.

Jeffrey Hopkins from Introduction to Kalachakra Tantra: Rite of Initiation with commentary by HH Dalai Lama

And finally, from Alex Berzin, also from the perspective of Highest Yoga Tantra:

In the final stages of the path of the highest class of tantra, the advanced yoga methods for drawing the energy-winds into the central channel do entail a man and woman sitting in a posture of union. Far from being exploitative, however, both partners are required to have reached the same advanced level of spiritual development. This includes both having reached the level of control of their subtle energies and their minds so that even though the bottom tips of their central channels touch, both avoid orgasmic release.

Sitting in such a yogic posture while engaging in complex visualizations and meditating on voidness is only done to enhance the practice on the most advanced levels. It is not done as the main practice or engaged in regularly, and is certainly not a practice for earlier stages of the path.

Moreover, to avoid any possibility of misogyny, machismo, or male chauvinism, one of the tantric vows is to refrain from ever speaking badly or mistreating women.

¹ Annotation by Tenpel: Over the last years Rigpa has referred to the young female Western disciples – most often newcomers of complex Tibetan Buddhism – with whom Sogyal Rinpoche formed a sexual relationship as “Dakinis”. A brief clarification of the term Dakini and it’s true meaning as given by Michaela Hass seems to be due in the context of this post.