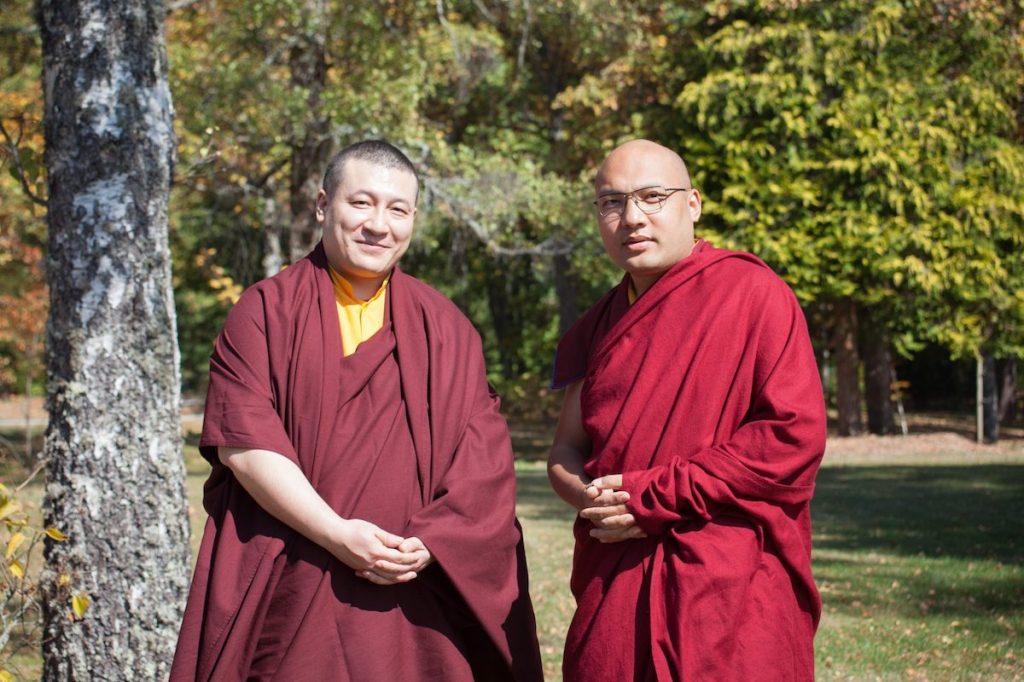 On October 11, 2018 a statement was released jointly by the two claimants to the title of Karmapa, His Holiness Ogyen Trinley Dorje and His Holiness Trinley Thaye Dorje.

We are both very pleased to have had this opportunity to meet and get to know each other in a peaceful and relaxed environment. We both had this wish for many years, and we are gratified that this wish has now been fulfilled.

The purpose of our meeting was primarily to spend time together so that we could establish a personal relationship. We were able to talk together freely and to learn about each other for the first time. We were thus able to begin what we expect will develop into a strong connection.

While we were together we also talked about ways that we could work to heal the divisions that have unfortunately developed within our precious Karma Kagyu lineage in recent years. We view it as our duty and responsibility to do whatever we can to bring the lineage together.

This undertaking is critically important for the future of the Karma Kagyu lineage as well as for the future of Tibetan Buddhism and the benefit of all sentient beings. We therefore ask everyone within the Karma Kagyu community to join us in our efforts to strengthen and preserve our lineage. We view it as our collective responsibility to restore harmony to our tradition which is a lineage of wisdom and compassion.

The statement indicates a new era dawning for the Karma Kamtsang lineage, based on both Karmapas reaching out to each other and seeking to build a relationship based on understanding and compassion.

HH Ogyen Trinley Dorje is followed by a majority of Karma Kagyu devotees, but His Holiness Trinley Thaye Dorje has a significant following in India and a large network of centres in the West. The dispute over the Karmapa title polarized the lineage, and it entered a period of division and enmity, with significant teachers falling into both camps.

Several eminent lamas, such as H.H. the Gyalwang Drukpa or Beru Khyentse Rinpoche, have issued statements supporting this reconciliation.

Two Tibet experts have commented for Tibet Sun on the unexpected meeting of both Karmapas.

For Tibetologist Vijay Kranti from Delhi it is “a big welcome development on the Tibetan and Mahayana Buddhist front.” He comments further:

This development becomes more important because supporters of both religious gurus have been exchanging rival claims for the past many years. This had, unfortunately, done more harm to the Tibetan cause and image of Mahayana Buddhism in general, and the unity and image of Karma Kagyu school and its great lineage in particular. Non-Tibetan friends of Tibet, especially Indian well-wishers like myself, see it as a great positive sign.

The meeting reflects for Vijay Kranti an “admirable maturity and wisdom on the part of both spiritual masters.”

Tibetologist Thierry Dodin from France says that for him “it is still too early to make really qualified comments.” He stresses that nevertheless, “some points can be made already now to highlight the situation”:

First of all, this happens at a time when both find themselves in a phase of orientation in their personal lives, with decisions to take that will have a lasting impact.

Second, so far this was only a meeting to “establish a personal relationship” between the only two individuals who can repair the schism.

But, third, at the same time, however good a relationship may develop between them, the way ahead is going to be stony. Persons and institutions who lived from the schism a quarter of a century long are not going to simply disappear. Besides, there can be only one Karmapa really, and the facts which have been established in this time cannot be undone.

Through both Karmapas bringing forth the wisdom of reconciliation, may the lineage heal for the benefit of all its practitioners, and may the spirit of harmony carry long into the future.